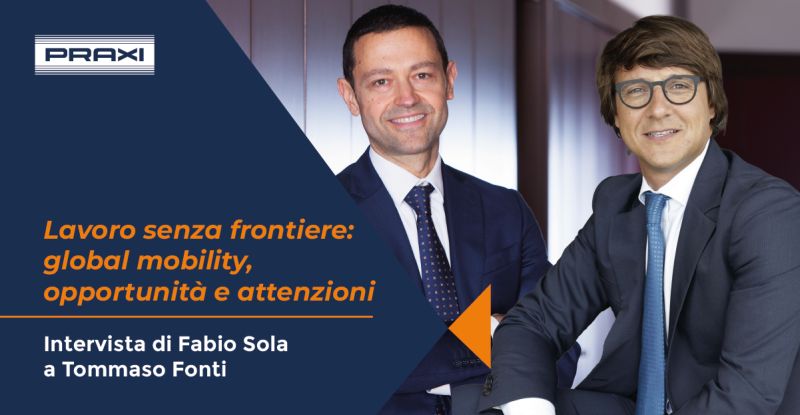 Executive search and global mobility are, in fact, activities that increasingly go hand in hand, as managers’ careers are becoming more and more international, and also the tax and social security contribution aspects of connected wityh the mobility of employees must be considered.

Let’s start lightly, from the sports pages of the newspapers… why did Inter have to sign the contract with Lukaku by 30 June?

Already in 2015, Italian law provided tax incentives for different categories of employees with the aim of attracting people from abroad through tax leverage: with the exemption of a part of the employment income, they are subject to an advantageous tax regime. One of the concerned categories, introduced in 2019, is precisely that of professional sportsmen and sportswomen, who particularly benefit from the tax incentives because they usually have very high salaries.

But coming to our activity as headhunters, does this tax incentive have points of contact with the so-called “brain gain”?

We often deal with the return to Italy of personnel expatriated abroad, especially in recent years following the pandemic. In this case, the so-called “Inbound workers tax regime”, provided for by Legislative Decree 147/2015, applies to citizens of any nationality who have been tax resident abroad for at least two years and then transfer their tax residence to Italy, maintaining it for at least two years and working mainly on Italian territory.

The benefits are very interesting, because for a minimum of five years taxes will only be applied on 30% of income (this can mean a tax rate of around 10% on gross income). And the tax relief can be even more significant, with the application for a longer period or a broader exemption under certain specific conditions, such as the purchase of a house or moving tax residence to certain regions in the Southern Italy.

Among the many technicalities that need to be studied, are there any points of attention that you would like to highlight for us?

The most significant (also because it is relatively new) concerns the return of seconded workers: in this case, the benefits only apply if the employee signs a new employment contract with his Italian employer with a different and higher role than the one held and maintained during the secondment abroad.

For us, the pool of “Italians abroad” has become very interesting… Are companies aware of these incentives? We recently found an Italian manager in Germany and – when hiring him – the company seemed surprised about the tax advantages…

Our clients are usually well informed on this matter, because they have good experience with global mobility. But you are right: it is not such widespread knowledge among those who do not manage the global mobility of their personnel on a daily basis.

Another aspect reported to us by the managers we meet is the increasing preference of multinational groups for hiring directly abroad. They almost always seem unconvinced by this ‘one-way ticket’. What do you think?

In our experience, too, Italians who have worked entirely in Italy, including also social security aspects, are very hesitant about such foreign contracts proposed by companies. Obviously, those who have decided independently to build a career abroad are in a completely different situation: for example, many Italians have been living for years in foreign Countries such as China.

In any case, companies can overcome the employee’s reluctance by proposing, together with the letter of consensual termination of the employment relationship, a commitment to his re-employment in Italy in a private deed. These commitments can, however, create consequences that are not always easy to manage from a legal point of view, because in some cases they are disavowed and the consensual termination of the employment relationship could be considered simulated.

And the social security aspect, which you mentioned, how should it be considered? Does the legislation of the Country where the person is employed simply apply?

Social security aspects are actually very complex and must be assessed on a case-by-case basis depending on the relationship with the Country in which the employee is assigned.

Obviously, everything is simpler within the European Union, because the principles of territoriality of social security and of the uniqueness of the legislation apply: in practice, only one regime is applied, which is that of the Member State where the employee carries out his working activity. However, this does not apply in the case of temporary posting of workers, where social security contributions may continue to be paid in Italy.

There is also an element of caution in the case of social security relationships abroad: the principle of aggregation (whereby the employee will eventually receive pensions from the different Countries where he has paid contributions) is helpful, but it really applies only when the employee has reached a minimum period of contributions defined by local legislation in each Country.

It seems to me that the discipline is simpler, but still tricky for EU Countries. And for non-EU Countries?

It really is an obstacle course: the situation changes from Country to Country…

Of course! And even within a single Country like China there are regions where the regulations for paying contributions have not yet been implemented. And so in that case contributions are only paid in Italy!

And what about the tax aspects? Is this also so complex? For example, how should tax residence be managed?

The first aspect that the employer must take into account is whether or not there is an international convention between Italy and the foreign Country regulating double taxation on income. If there is, it is the convention itself that determines in which Country the employment income is to be taxed.

Maintaining the tax residence in Italy means maintaining Italian taxation on income wherever it is earned, including income from employment. If the employee transfers his tax residence abroad, he may continue to be taxed in Italy, but only on income derived from work performed in Italy.

One of the most frequent “incidents” is when a worker thinks he has acquired tax residence abroad, often because he is convinced that simply de-registering from the Registers of the Italian resident population is sufficient, but then has to resolve issues to regularise his situation with the Italian Revenue Agency which, even years later, can contest the non-payment of taxes.

The requirement that is often overlooked is whether or not the family unit is maintained in Italy. When it remains in Italy, and the worker joins it periodically, the loss of tax residence in Italy is less defensible.

Another topic that creates many doubts is related to Brexit, which seems to have complicated life a bit… What are the aspects to take into account?

The most critical and most interesting aspect after Brexit is undoubtedly immigration: which entry visa should I apply for to work in the UK?

In case of intra-corporate transfers, i.e. between companies of the same group, English law provides for the so-called ‘Intra Company Transfer’, i.e. an entry mode that allows employees to work in the UK for a maximum period of 5 years on condition that the worker has been employed by the posting company for at least 12 months and receives a minimum gross salary set by the English immigration authority.

Tommaso, thank you. Each of the topics we have touched upon would deserve a chapter of its own, as each topic opens up non-trivial issues and facets.

Of course, the scenario is very complex. The suggestion we give companies is not to improvise, and to examine each case in advance to make informed decisions!